Heroes of our time

As a kid, Piet Raijmakers senior knew one thing for certain: when he worked with horses, he felt as happy as can be. At the age of fifteen, he seemed to have more feeling for horses than many others. Winning team gold at the Olympic Games, the Hsilver at the Olympics in Barcelona 1992, endorse Piet Raijmakers’ incredible craftsmanship. In 2010, Raijmakers ended his long sports career at the age of 53, dedicating himself to the career of his sons Piet junior and Joep.

“At home, I was number six of a total of nine children; we did not have the opportunity to buy a riding horse, but we did had a pony which my father used to transport the pitchers used by milking the cows. On Saturdays, my sister took that pony to the local pony club and on Sundays, I got the chance to take the pony”, says Piet Raijmakers about his first experiences with horses. “When I was fifteen years old, I left to school and started working for the local blacksmith. In addition, I rode some horses at the stables of André Heijligers and although I did not have a penny in my pocket, he trained me every day. When I was seventeen, I was world-famous in my hometown Asten and surroundings!”, Raijmakers laughs. “As a boy, I won a lot and I was around horses all the time.”

Talent needs to be polished
At age seventeen, Piet Raijmakers was offered a professional job in the horse business, which was anything but usual at that time. “A professional job in horses did not really exist in those days, but a man from Weert offered me a job with a good salary. I thought: ‘Let’s do it!’”

From an early age, Piet Raijmakers turned out to be an exceptional talent with horses with much more feeling for horses than anyone else. “But a talent is like a rough diamond, it needs to be polished. For years, I have trained everyday with André Heijligers. Maybe if I had to figure it out all by myself, I would have been nowhere. So, sometimes you need a bit of luck too!”

Glory days during the 90’s
During the 80’s, Piet Raijmakers rented an equestrian center called De Witte Vallei in his hometown Asten. “In those days I had my own business and everything went quite well actually. But then I got a job offer from Zangersheide, where I started on January 1st, 1991.” On the acclaimed stud Zangersheide of the late Léon Melchior, there was a very special horse waiting for Piet Raijmakers: Ratina Z. “When Ratina Z came into my life, I was a little bit older and wiser, so I was able to see she was an exceptional, incredible talent. She was a loose cannon, but through my experience I could get her energy in the right direction and she became the best horse in the world. If Ratina would have come in my life when I was for instance twenty years old, things might have gone very differently.” Thanks to team gold at the European Championships in La Baule, Olympic team gold and individual silver at the Olympic Games in Barcelona with Ratina Z and numerous other top performances with different horses, Piet Raijmakers sees the 90’s as his best period in his sports career. “I knew I was a good rider at that time, but I wanted to know how good I really was. Was I able to fully focus on a championship? The year before the Olympics, I’ve been puzzling a full program for Ratina Z towards the Olympic Games between Christmas and New Year’s Eve. And then we won team gold and individual silver in Barcelona!” After a highly successful period at Zangersheide, Raijmakers joined the Cordia family of Jewel Court Stud. “That was a wonderful time as well. With their horse Jewel’s Emerald, I became Dutch champion for another time.”

Farewell to the showjumping sport
Even after the 90’s, there were still plenty of top performances by Raijmakers, with winning team gold at the World Equestrian Games in Aachen 2006 as an absolute highlight. Raijmakers’ mount in those days was the chestnut Van Schijndel’s Curtis. “I bought Curtis as a 5-year-old and everybody was saying: ‘What will you do with that horse?’ Five years later, we became world champions. Those are things to remember and smile about”, Raijmakers recalls. In 2010, Piet Raijmakers officially said farewell to his professional sports career in showjumping at Indoor Brabant. “As a sportsmen, ending my career hurt me, because I had the feeling I could still perform at the top of the sport. But I did not want to stand above my sons Piet and Joep any longer and wanted to put everything aside for them.” 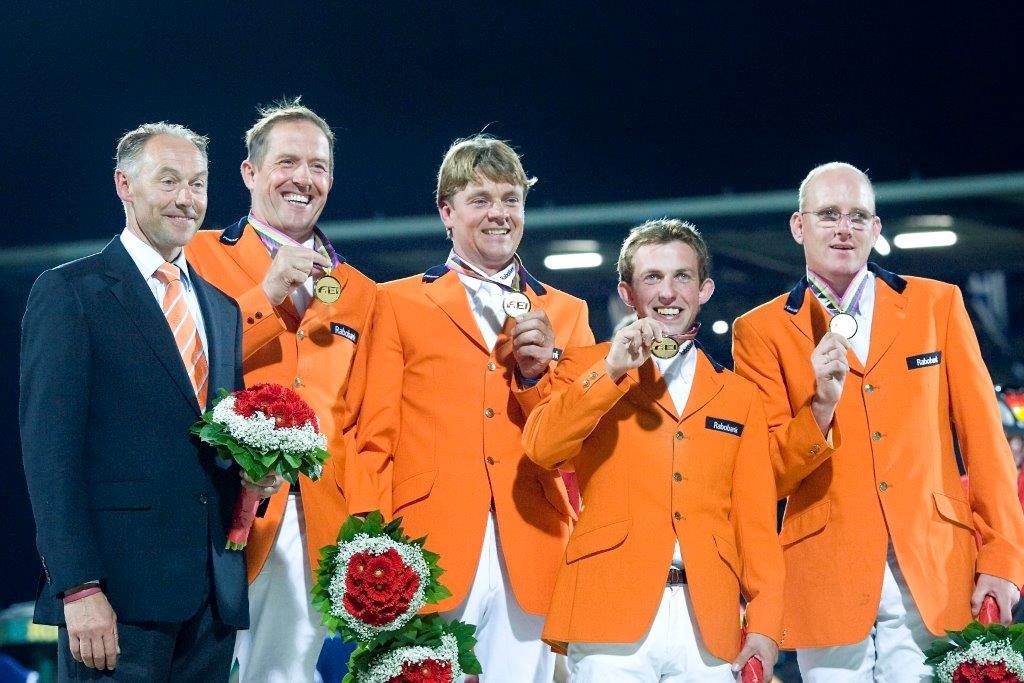 Still passion
But still after all those years, Piet Raijmakers did not unlearn how to ride a horse. “No, you never forget how to ride! Recently, I rode a horse in Qatar and jumped a big course. Well, that horse jumped by the book again! You never unlearn horse riding, it is just like cycling!”, Raijmakers laughs out loud. The passion for horses Raijmakers already felt as a boy at age fifteen, has become stronger and stronger over the years. “I still love to go to shows to look for horses or train my students or sons and I really love to help the boys at home every day again. As long as I’m healthy, I continue to do that. I really do not want to retire!”, the 59-year-old Piet Raijmakers states.