For the Olympic Games in Rio de Janeiro 2016, all eyes are aimed at coach Rob Ehrens and his Dutch showjumping team. At both the World Equestrian Games in Caen 2014 and the European Championships in Aachen 2015 the Dutch squad has been superior and ‘golden boys’ Jeroen Dubbeldam, Maikel van der Vleuten, Jur Vrieling and Gerco Schröder took home the team gold medal. For Rob Ehrens, 2016 will be his twelfth year as coach of the Dutch showjumpers and over the years his policy has proven te be incredibly successful. 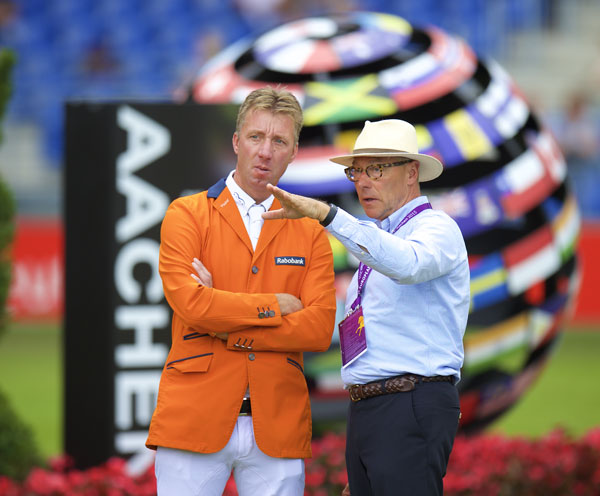 Obviously, the World Equestrian Games and the European Championships were great highlights for Rob Ehrens, but all the Dutch horse-loving-people are already looking forward to the Olympics in Rio. “If you become both world and European champion in the years before the Olympic games, the pressure is obviously higher. Yet the Olympics are no different than other championships: the preparation is the same as for European or World Championships and simply cannot get much bigger and wider than at the other championships. The Olympics are a very important event, but it remains an event. For me it is important to not let my riders feel the pressure. Just put the pressure on me, I like a bit of pressure”, Rob Ehrens laughs.

‘Thinking towards a championship’
The Dutch showjumping sport has had two incredibly successful years, with not only winning the two team gold medals, but also the individual gold medals of the already legendary rider Jeroen Dubbeldam. How could the Netherlands be able to achieve these major successes according to Rob Ehrens? “First of all, both the riders and the horse-owners are always thinking along with me to make a good plan towards a major championship. These riders never ‘use’ their horses as a tool to make as much money as possible, they are true horseman. They always think towards a championship and try to get the best possible track, without asking too much of their horses”, Ehrens explains. “Last year, we have again seen Dutch riders skip big, lucrative events to get their horses ready for the European championships. As a coach, you cannot enforce these kind of things, these can only be done in good harmony. And creating that harmony is certainly not something done in one or two years, such a thing takes years and years of work.” 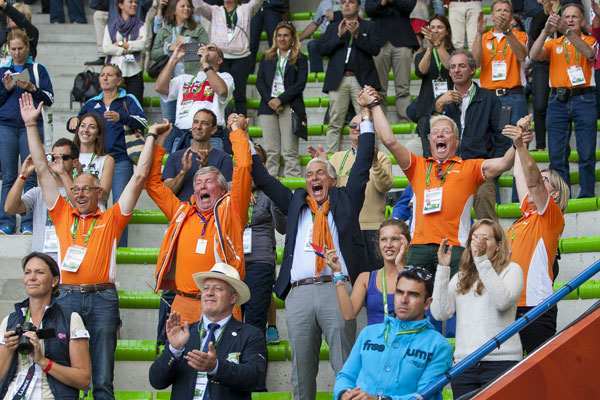 Preparation is essential
According to Rob Ehrens, it is precisely this preparation that is essential to peak at a major championship. “You should know everything about your horses and riders and consider all possible scenarios. If something happens, such as an injury to horse or rider, you should not panic, but think about how you are going to fix it and fill it in again. Then sometimes you have to be resourceful and keep thinking broad wise. This applies to every country, because there are few or no countries that can appoint ten combinations for the Olympics”, Ehrens states. With only strong individual combinations you cannot make it in the Nations Cups, team spirit, solidarity and fellowship are essential. “Over the years our top riders have really grown together. Fellowship and team spirit you cannot create in a week of boot camp, that is created all year long”, the coach states. 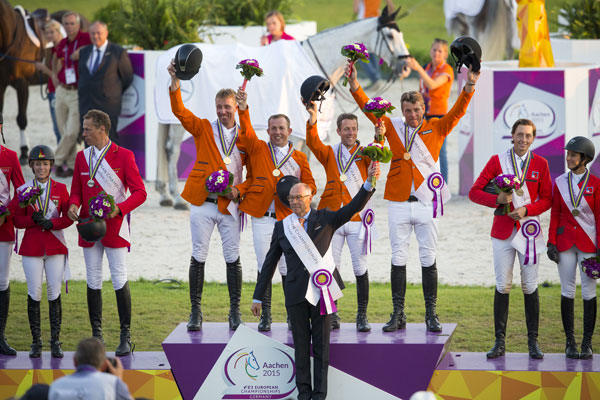 Excellent sportsmen
The ‘golden four’ of Caen and Aachen, Jeroen Dubbeldam, Jur Vrieling, Maikel van der Vleuten and Gerco Schröder, have proved to be an outstanding team over the last years. “Personalities obviously have to fit together, but we also can consider ourselves incredibly lucky that none of our top riders are egoists. They are all realistic, excellent sportsmen. Not only these four riders, but all members of our A- and B-squad fit well together and can function excellent in a team.”

The successes did not change Ehrens and his riders. “These successes are great and you have to enjoy that kind of moments, but you have to stay with both feet on earth. Everything goes on again and you have to remain the same person. For me, success is not always necessarily winning a medal. If you made the most out of a group of riders and you end up fourth, it can be just as wonderful. You should try to get positive things from everything, because we know exactly how quick you can be number fourteen again”, Ehrens laughs.

Eyes already on Rio
The Olympic Games seem to be far away, but Rob Ehrens already keeps Rio de Janeiro in mind. “Immediately after the European Championships in Aachen, the preparation for Rio started. It is a long-term preparation; you have to look forward again and again. What do we have? What will we do? It is important to filter the best combinations and when the Olympics come closer, we will see which of them are in form, are in the flow and fit-to-compete. Every four years the Olympics has been the icing on the cake and we always to peak there”, says Rob Ehrens, looking forward to Rio de Janeiro 2016. 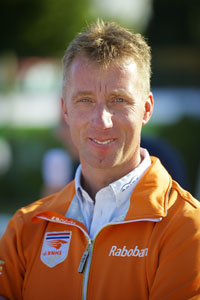 Jur Vrieling
“Rob has taught me a lot about management”
Under the reign of Rob Ehrens, Jur Vrieling has developed himself as one of world’s best and most successful riders and he contributed to many great successes of the Dutch in recent years. “A few years ago I was one of the Netherlands’ most successful riders if it came to winning international classes, mainly speed classes. But over the years Rob has taught me how to really peak in the Grand Prix competitions and the Nations Cups. Rob has always been very strict and clear to me and taught me a lot about management, consequence and discipline. All aspects I needed so badly”, Vrieling explains. “Besides, Rob can always motivate you in the right way so you get mentally stronger and stronger. If you take for example the World Equestrian Games in Caen: I had two down in the first round with VDL Bubalu and Rob told me very clearly what I did wrong and what I should do better. Just by really motivating me in the right way, I could not wait to ride my second round. And in that round Bubalu and I produced a so much needed clear round!” 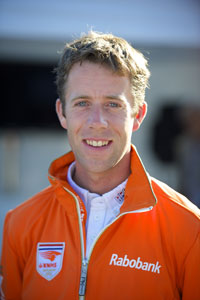 Maikel van der Vleuten
“Rob always motivates you in the right way’”
Riding his best horse VDL Groep Verdi TN N.O.P., Maikel van der Vleuten has been one of the Netherlands’ most consistent and valuable combinations. For Maikel, coach Rob Ehrens also played an important role. “One of the strengths of Rob is that he is always very open and treats everyone equally. He understands the riders well and he lets you work in your own way, but he knows exactly how to motivate you and help you with your weaknesses at the right moment. Rob always motivates you in the right way, without really putting the pressure on”, Van der Vleuten tells about Ehrens. The golden team for the last two championships has over the years become a very strong team. “In one way or another, it clicks very well between us and you grow closer together. Rob also contributes to this, because he is not only there during daytime when you have to work, but also at night when we all get together and have a drink. Those moments are also very important!” 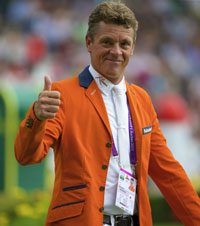 Jeroen Dubbeldam
“From the beginning, Rob gave me trust”
Reigning European and world champion Jeroen Dubbeldam has been working closely together with coach Rob Ehrens and always felt the support of Ehrens, achieving his greatest successes. “When Rob became coach in 2005, I was part of the team and we immediately had great success, earning two bronze medals at the European Championships. From the beginning, Rob gave me trust, which I never violated. So over the years you really build something together. In addition, there is a certain chemistry between us”, Dubbeldam explains. “When Rob and I speak on the phone for five minutes, we already know what is going on and how things look like and from that moment we can hold on to it. You can always support each other technically, but the chemistry and trust between us is perhaps the most important!” 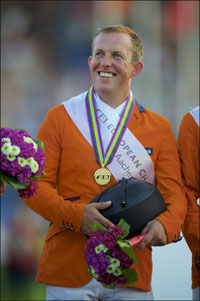 Gerco Schröder
“Rob is always looking for the right solution”
For years, Gerco Schröder has been one of the most valuable riders to the Dutch team; in the past riding Eurocommerce Monaco, Milan and Berlin, and later on riding Eurocommerce New Orleans, Glock’s London N.O.P. and Glock’s Cognac Champblanc. “Rob has always been well aware of the shape and being of our horses”, Gerco says. “He lets you do your own thing, but can support you very well when something is needed and what is needed. Even when something goes wrong and many people would be stressed, Rob stays calm and looks for the right solution. In addition, Rob always thinks about the long term. So when a horse is not fully fit, Rob will never push to for example jump the second round of the Nations Cup. He will not let you ride. He always chooses the horse’s health!”